Ford Recognizes its Top Global Suppliers for Outstanding Performance in 2013 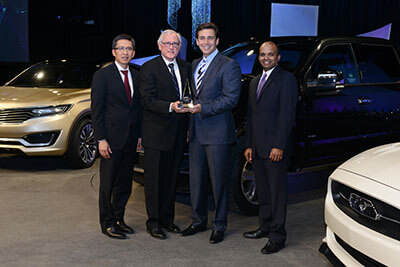 Fifty one global supplier partners were honored at a special ceremony for their exceptional contributions to Ford Motor Company in 2013. Top-performing suppliers were recognized for achieving excellence in key areas including quality, cost performance and delivery.

Summit Polymers was one of only two top performing suppliers that received two awards during the ceremony.  One was a Gold Award  for quality and the other a Recognition of Achievement for “warranty improvement”.  This is the fourth year in a row that Summit was honored with a “World Excellence” award for quality.

The World Excellence Awards recognize suppliers who not only achieve the highest level of cost competitiveness, quality and delivery, but also achknowledge the diverse cultures, value and ideas of the thousands of individuals they employ.

“These suppliers have demonstrated the highest level of excellence, and we are honored to have them as part of the One Ford Team.”